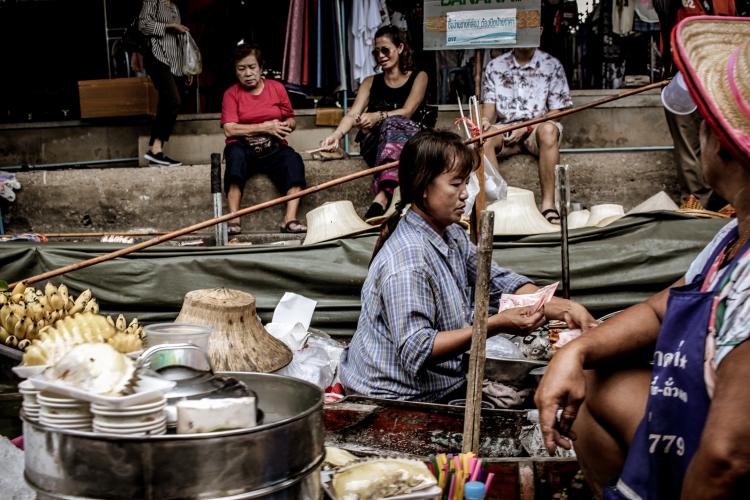 Claiming the authorities had failed to protect citizens from PM2.5 smog, especially the underprivileged in urban slums, academics have called for a clean-air act and an independent environmental protection agency (EPA) to safeguared the "people's right" to a healthy atmosphere.

Nuchanart Tantong, coordinator of the Four Regions Slum Network, said she and most of her neighbours living in a Bangkok slum had no idea that the haze lingering over the capital since December was toxic.

“We just carried on with our daily lives in our non-air-conditioned homes and worked outdoors without any protection,” she said.

“Having had no warning from the authorities, the poor people in the slums only learned from the media that the dense smog was harmful and we realised our health had been at risk for weeks.”

Noting that most slum dwellers earn their living outdoors and often toil along polluted roads for up to 12 hours per day, Nuchanart said they were most vulnerable to health problems caused by the smog.

Many slum dwellers had recently contracted respiratory ailments, especially children and the elderly, she said. All they could do to protect themselves was buy cheap facemasks and plant as many trees as they could around their communities.

These measures were proving far from adequate in protecting health because the number of sick people continues to rise, she said, and the additional expense for healthcare only worsened their financial situation.

“We know our daily activities such as outdoor cooking are partially contributing to the problem, but the bigger proportion of the pollution is coming from heavy traffic and industry,” she said. “We need urgent help and swift, official mitigation measures here before all the poor people in the slums die from polluted air.”

Siwatt Pongpiachan, director of the NIDA Centre for Research and Development of Disaster Prevention and Management, pointed out that the Constitution enshrines the right to a healthy environment with clean air other laws protect the environment and tackle pollution. But the government had done such a poor job of mitigating the smog lately that it’s clear there are problems with enforcement.

“Right now, the core agency in charge of tackling the problem is the Pollution Control Department, but its primary work is making policy. It’s unable to effectively coordinate all the agencies to deal with the smog,” Siwatt said.

Thailand needs a specific law comparable to the Clean Air Act in Britain and the United States, as well as a central, independent agency directly focusing on keeping the environment clean, like the EPA in the US, he said.

Asst Professor Kanongnij Sribuaiam of Chulalongkorn University’s law faculty said Thailand was behind neighbouring nations such as Singapore and the Philippines in ensuring its citizens had clean air.

“The Philippines has a Clean Air Act and an environmental-protection agency to oversee pollution measures,” Kanongnij said.

“The Philippines has also adopted a ‘polluter pays principle’ – PPP – to help finance pollution control, and we have nothing like that in Thailand.”

Witsanu Attavanich, an economics lecturer at Kasetsart University, said it was academically proven that a properly enforced Clean Air Act effectively tackles pollution. He cited a 2009 study by Aufthammer, Bento and Lowe in the US that examined PM10 dust levels over the long term.

Witsanu said strict regulations could reduce PM10 by 7-9 microgram per cubic metre of air annually, representing a decrease of as much as 14 per cent. “The longer we wait for efficient measures, the longer the air pollution will be harming our human resources and jeopardising our country’s economy,” he warned.