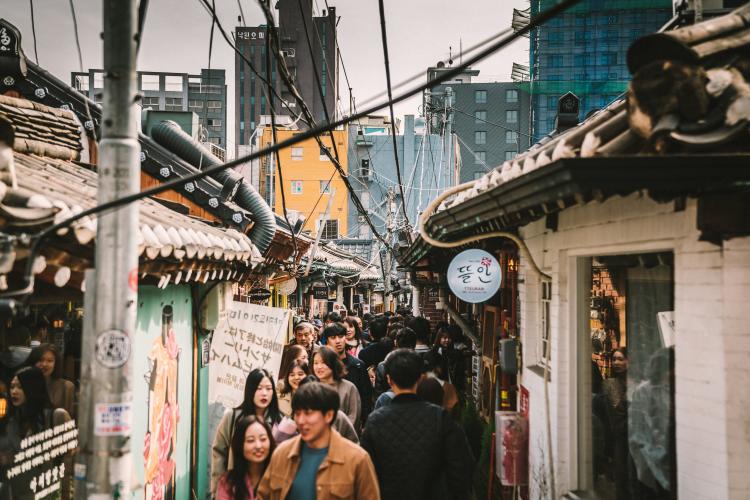 For the last few weeks, Korea has been under siege by the worst fine dust the country has ever seen, not only in terms of severity but also longevity. In some regions like Gwangju and South Jeolla, a government-issued fine dust warning lasted eight days, the longest since the system was implemented in 2015.

While periods of acute pollution have always affected the market - generally by boosting sales of masks and air purifiers - this year things got so bad that the impact was much broader, changing consumer behavior and prompting the launch of new products and services as desperate Koreans look for ways to combat the fine dust.

A must-have for any fine dust season, masks have been popular for quite a few years now. Sales figures for this year, however, show that consumer awareness of fine dust has reached new heights this year.

According to ecommerce website TMON, customers this year showed a tendency to prefer masks with finer filters and made more purchases in bulk.

From Feb. 28 to March 5, sales of Korea Filter (KF) masks - which are verified by the Ministry of Food and Drug Safety - increased 50 times compared to the same period last year. Among them, masks rated at the KF94 level accounted for 93 percent of sales, an increase of 22 percentage points from last year, whereas KF80 masks saw sales decline to 6 percent from last year’s 29 percent.

KF94 means products are verified by the government to block 94 percent of all 0.4 micrometer particles coming through the mask, while KF80 can prevent 80 percent. A dense filter may be effective in blocking fine dust but it is also less comfortable as it feels stuffier and is harder to breathe through.

“In the past, KF80 was considered a reasonable choice to wear on a daily basis,” the company said. “This year, KF99 masks are selling well with a sales growth on year of 989 percent.”

Compared to the same period last year, when 72 percent of all mask sales came from individually packaged products, the figure dropped to 58 percent this year while boxed sets containing more than 10 units jumped to 33 percent from last year’s 21 percent.

At convenience store CU, growth of mask sales over the winter outpaced disposable hot packs, a traditional steady seller for the season.

Between Dec. 1 and Feb. 25, masks sold 22.6 percent more on year. The growth was particularly concentrated on mid-January, when fine dust levels unexpectedly shot up. Hot packs saw sales retreat 4.8 percent on year during the same period. A warmer winter than the previous year was another influencing factor, CU added.

Air purifier sales are breaking records as well. Local electronics maker Dayou Winia said the product sold 685 percent more on year between March 1 and 5. The sales volume during these five days was equivalent to 61.6 percent of what the company sold in the entire month of February.

“Air purifier sales typically rise around April and May,” the company said. “Demand for the product sector is expected to continue rising in the year’s first half considering the possibility of yellow dust hitting Korea before the summer.”

“Air purifier sales were going up by 1.5 times on a monthly basis in January and February, but recently sales have been doubling week on week,” said a company spokesman. “We’re seeing monthly sales for March reach threefold of last year.”

LG Electronics has already recorded a threefold increase so far this month. The product’s popularity is so high that LG says that for some popular models there may be delays in delivery despite the company operating its factories at full capacity.

While masks might help combat dust outdoors, staying inside is the best way to completely avoid fine dust.

Orders from the food delivery app Baedal Minjok, or Baemin, rose by 7.5 percent, or 240,000 orders, to 3.34 million orders from March 1 to 3 compared to the previous weekend. The number of orders was down 4.5 percent compared to the same period last year, which Baemin says is normal as this is normally the time of year when people start going outside as the weather warms up.

The types of food people order also appears to be different on days when fine dust levels are high, with a stronger demand for steamed and soupy dishes. Sales of that kind of food shot up by 11.9 percent last weekend compared to the previous weekend.

The number of orders from Yogiyo, another food delivery app, also jumped up 25.4 percent from the first weekend of March compared to the second weekend of February.

A spokesman explained that delivery orders are usually concentrated during the weekend, but the company has been seeing a rise in orders on weekdays due to fine dust. The number of orders Yogiyo received on Monday, March 4, was 15 percent higher than the second equivalent Monday in February.

The number of visitors to malls and department stores is also rising.

“Though there isn’t much I can do during weekdays because of work, I try to stay indoors when I have my own time on the weekends,” said a 27-year-old office worker surnamed Jung. He explained that he planned to go to a theme park with his girlfriend but instead headed to the mall, where they spent the day indoors watching a movie and going shopping.

Hyundai Department Stores also enjoyed extra profits last week. Its sales from March 1 through 5 jumped up 8.1 percent on year while the number of visitors shot up 9.7 percent on year.

Data from BC Card also backs the effect of fine dust on family outings.

A report from the firm’s Big Data Center released Thursday showed that in the last two years, BC’s credit card holders spent 15 percent more in malls on days when the government announced the fine dust level was bad. Spending at kid cafes rose 15 percent on such days while movie theaters also enjoyed an increase of 29 percent.

While the poor air quality may offer a business opportunity for some, it presents a huge challenge for others.

Those operating businesses outdoors were hit hard by the fine dust crisis. To try and reassure potential punters, the sports industry is actively trying to combat the fine dust.

The KBO has decided to provide 75,000 masks to each of Korea’s 10 top-tier baseball clubs, the first such attempt seen in the professional sports world. The league is hoping to prepare the masks in time for the opening games on March 23.

In fact, four professional baseball games in April last year were canceled due to the overwhelmingly high levels of fine dust. The KBO asked the Ministry of Culture, Sports and Tourism to provide a fund to help combat fine dust, ultimately receiving 600 million won ($540,000).

The K League recently established a new rule that allows for games to be canceled when fine dust levels are high enough for an alert to be issued three hours prior to the start of the game.

A 27-year-old office worker surnamed Kim said, “I enjoy going to baseball games, but at this point, I’d much rather watch the game comfortably at home without being concerned about the quality of every breath I take in.”

With fine dust affecting the country for increasingly long periods, some industries are devising ways to introduce permanent facilities or services to fight fine dust.

Coffee shops have started offering fresh air as another selling point. Starbucks Korea has installed more than 1,200 air purifiers in its 212 stores nationwide, complete with signs to let customers know the air is clean. The coffee chain is planning to install air purifiers in all of its 1,270 stores within this year. Its rival A Twosome Place also installed an air purifying system in its newly-opened branch in Seocho District, southern Seoul, and is observing the change in air quality for possible additional installations.

An air shower that blows away dust will be installed by the front door of apartments. It can blow air at a speed of 25 meters (82 feet) per second. It also plans to install a large water mist facility inside the complex to remove fine dust from the air.

GS E&C will install “Sys Clein” built-in air purifiers in the ceilings of its new Xi apartments starting in this year’s second half. Sys Clein can clean the air without additional ventilation. Moving air purifiers release CO2 into the house and users still have to open the window from time to time to refresh the air.

“There’s been rising demand from the consumer end to maintain cleaner indoor air due to the rise of fine dust,” the company said. “We plan to expand the system to offices and commercial buildings in the future.”

Via Pollution changes how we shop, live and eat

Photo by rawkkim on Unsplash