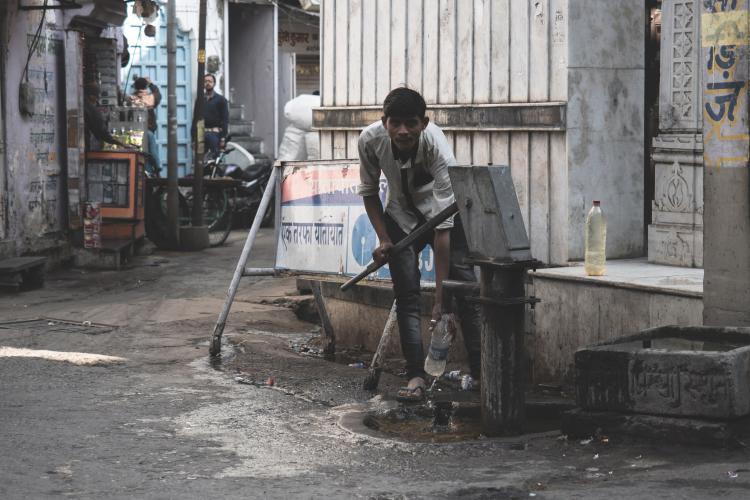 Seven of the world's 10 worst polluted cities are in India, a new study has revealed, with wider South Asia home to scores more blighted by dirty air.

Gurugram, a city about 30km southwest of India's capital New Delhi, had the worst pollution levels globally in 2018, the study published on Tuesday by AirVisual and Greenpeace showed.

Three other Indian cities, and Faisalabad, in Pakistan, made up the top five. Out of the 20 most polluted cities worldwide, 18 were in India, Pakistan and Bangladesh.

New Delhi, home to more than 20 million people, was ranked at 11, making it the world's most polluted capital, ahead of Dhaka, in Bangladesh, and Kabul, in Afghanistan.

"Air pollution steals our livelihoods and our futures," Yeb Sano, executive director of Greenpeace Southeast Asia, said in a statement. "In addition to human lives lost, there's an estimated global cost of 225 billion dollars in lost labour, and trillions in medical costs," he added.

"We want this report to make people think about the air we breathe, because when we understand the impacts of air quality on our lives, we will act to protect what's most important."

The AirVisual and Greenpeace index was based on the quantity of PM2.5 registered last year in tens of thousands of air-quality monitoring stations around the world.

PM2.5 is particulate matter that has a diameter of less than 2.5 micrometres, which is about three percent the diameter of a human hair.

The 92 most-polluted cities all had an "unhealthy" average annual presence of the particles, which can penetrate deep in the lungs and bloodstream and cause a wide range of adverse health effects, including premature death in the most extreme cases.

The World Health Organization estimates seven million people are killed every year due to air pollution, while non-fatal effects of over-exposure to PM2.5 include irregular heartbeats, aggravated asthma and decreased lung function, according to the United States Environmental Protection Agency.

Lauri Myllyvirta, a senior analyst for Greenpeace's Global Air Pollution Unit, said there were a "number of reasons" for the high quantities of the particulate matter throughout South Asia documented in Tuesday's report.

"A lot of households in South Asia rely on solid fuels, sometimes biomass, often coal, for their cooking and heating … and there are often cities with large scale industries with poor emissions controls," he added.

"You do have other places with similar levels of emissions, but because you have far fewer people [there], it doesn't lead to this kind of … catastrophic level of air pollution," he said.

South Asia has the highest population density of any region within Asia, which itself is the most densely populated continent on earth.

'Our bodies are suffering'

"We are enduring this but our bodies are still suffering from it ... [and] governments are trying to fix the blame rather than the problem," Jyoti Pande Lavakare, president and cofounder of Delhi-based NGO Care for Air India, told Al Jazeera.

"It is horrific to live under such poor air quality conditions," she added.

Led by Prime Minister Narendra Modi, India has focused on delivering economic growth in a bid to boost employment and drag millions out of poverty.

Lavakare said the NCAP, which aims to cut concentrations of PM2.5 and PM10 (larger particulate matter) throughout the country between 20-30 percent by 2024, was a "reactive" attempt to clean up India's air and called on New Delhi to take a more "proactive approach".

"We need year-round measures on a national scale," she said, adding there was a need for "cleaner fuels for motorised transport, removing subsidies on dirty fuels, enforcing strict controls on open waste burning and reducing industrial emissions".

A spokesperson for the Indian health ministry did not immediately respond to a request for comment.

While the Asian economic powerhouse still accounted for 22 of the 50 most polluted cities worldwide, its capital, Beijing, showed a marked improvement on 2017 levels of pollution, with the average annual presence of particulates falling by more than 13 percent last year.

AirVisual and Greenpeace said the reduction was a result of the "extensive monitoring networks" and effective "air pollution reduction policies" rolled out by Chinese authorities in recent years.

Under President Xi Jinping, China's ruling Communist Party has pledged to wage a "war" on the country's chronic air, water and land pollution.

Describing Tuesday's report as "very alarming and very concerning" for the most part, Myllyvirta praised Beijing for showing "what can be achieved when a country makes tackling air pollution a top priority".

Via India has the world's worst air pollution: report

Photo by Patrick Beznoska on Unsplash