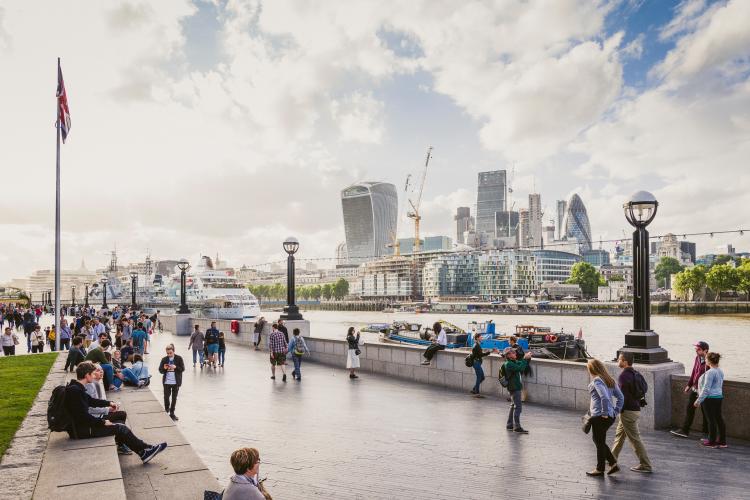 In January, the city of London started an air quality monitoring project that will provide data about how pollution varies over time and from neighborhood to neighborhood. The Breathe London project will help regulators determine whether pollution controls in the city are working, and will allow atmospheric chemists to test emerging technologies, including low-cost chemical sensors and air-quality modeling software.

The project, launched on Jan. 16, is a collaboration between the London mayor’s office, the Environmental Defense Fund Europe, Google Earth Outreach, and UK researchers.

Traditionally, air quality monitoring has been limited by the price and complexity of sensors, says Joshua Apte, an atmospheric chemist at the University of Texas at Austin who is on Breathe London’s scientific advisory board. Many cities, including London, use networks of small numbers of stationary, reference-quality devices based on costly optical technology. This approach works well for estimating average levels of secondary pollutants like ozone and smog, which are produced by reactions between primary pollutants such as nitrogen oxides (NOx) and volatile organic compounds. These sensors are sufficient for monitoring secondary pollutants because their levels tend to be relatively uniform across urban regions.

Levels of primary pollutants, which vary much more over large areas, have been more difficult to monitor and regulate, Apte says. Modeling software is designed to make certain assumptions about them—for example, atmospheric chemists are pretty confident that areas near major roadways have relatively high levels of carbon dioxide and NOx. But pollution hot spots can be found beyond highways, says Ramón Alvarez, an air quality scientist at the Environmental Defense Fund in Austin, Texas, who is involved in the Breathe London project. “There are idiosyncratic sources: businesses that attract a lot of traffic or produce unregulated emissions,” he says. But without fine-grained data, these sorts of sources and their public health effects have mostly been invisible. That’s where the hyperlocal monitoring of Breathe London comes in, Apte says.

Breathe London will rely on three kinds of sensors. The project will draw on data from the city’s existing stationary monitors, and enrich it with localized data from less expensive stationary and mobile sensors. One-hundred shoebox-sized monitors attached to lampposts throughout the city will use compact electrochemical sensors to measure NOx, CO2, and particulate matter; some of the sensors can also measure ozone. These sensors cost about one-tenth the price of standard devices, says Rod Jones, an atmospheric chemist at the University of Cambridge. Finally, to cover much more ground, the project will gather continuous readings from two Google Street View cars driving around the city. These vehicles will carry spectroscopic sensors to measure the same list of pollutants, with the addition of black carbon (a by-product of coal combustion) and ultrafine particles. These sensors have a fast response time and can take readings every 30 m.

After the Breathe London team works out some of the data analysis kinks, the project will host real-time pollution maps on their website. The project also will produce pollution forecasts, says David Carruthers, technical director of Cambridge Environmental Research Consultants, which is providing modeling software for Breathe London. “If you have the weather forecast, you can predict pollution concentrations in the short term,” he says. “And in the long term, we can look at the effects of policy on concentration patterns.”

In fact, one initial goal for the project is to take baseline measurements before the city implements its Ultra-Low Emission Zone. Starting April 8, drivers whose vehicles do not meet stringent emissions requirements will have to pay a fine to enter central London. But researchers aren’t sure whether this regulation will improve air quality city-wide, or simply push polluters to other neighborhoods. Breathe London will provide data to help assess the policy’s effects, while also monitoring smaller scale interventions, such as controls over vehicle traffic around schools.

Apte points out that hyperlocal monitoring data has provided insights into the public health implications of primary pollutants. Since 2015, his group has been using Google Street View cars to collect mobile pollution data in Oakland. By combining this high-resolution pollution data with health records and address information from patients in the area, Apte and collaborators at Kaiser Permanente Northern California’s research division found that street-level differences in exposure to NOx and black carbon were associated with risk for cardiovascular events such as heart attack and stroke (Env. Health 2018, DOI: 10.1186/s12940-018-0382-1).

It’s too early to do such a study in London. But Jones says Breathe London will also answer questions about how to conduct future experiments in cities. The project will help researchers understand what kind of data they can glean from different types of sensors, and how to best analyze it. Some atmospheric chemists are skeptical about the usefulness of the low-cost sensor technologies, but Jones says by combining many of them, the result could be greater than the sum of its parts. “A lot of the technology for these static networks is not proven yet,” and researchers don’t have established protocols for how to interpret their data, he says. He hopes that Breathe London’s work will establish such protocols, and make this kind of air-quality monitoring accessible in places that can’t afford large networks of high quality stationary sensors. “This is a test bed,” he says.